Research Faculty Spotlight:  Q and A with Lindsay Zanno 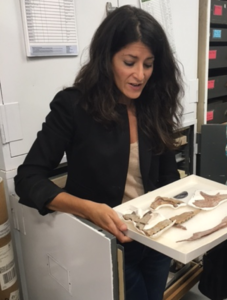 Like Dinosaurs? Follow the new discovery scene? Then chances are you’ve heard of Lindsay Zanno. She’s an Assistant Research Professor of Paleontology with BioSci, as well as the Head of the North Carolina Museum of Natural Sciences’ Paleontology Research Lab. Joining the university in 2012 through a joint appointment with NCMNS, Lindsay brings a special pride to the Department. With discoveries reaching worldwide acclaim in her field, her research sparks curiosity and imagination, which for many of us dates back to childhood. The same is true for her….

Q: When did you know you wanted to be a paleontologist?
A: It’s cliché, but I was a kid fascinated with dinosaurs. Like most, without opportunities to engage, my interest waned. I was pursuing an undergraduate degree in pre-med when my mother bought me the book “From Lucy To Language” by Donald Johanson. It resonated so powerfully with me that I read every book in my local library on human evolution. When I ran out, I up and moved Albuquerque to study paleoanthropology. There, collaborating with folks at the New Mexico Museum of Natural History and Science, the dinosaur spark rekindled.

Q: What and where was your very first find?
A: My first dinosaur discovery was a partial skeleton of Parasaurolophus in the Cretaceous badlands of southern Utah. If you’re not familiar with this critter, imagine an animal with six feet of narial bony tubing wrapped up in a long head crest. Oddly enough, we are now one-year into a collaborative project with the Ditto Lab* to reconstruct airflow and resonance inside the skulls of various Parasaurolophus species with the goal of determining if visual or auditory signals were driving their communication strategies. So I guess after 15 years my relationship with Parasaurolophus has come full circle.
[*Dean Bill Ditto, College of Sciences]

Q: While in the field and working in the very remote locations that you do, is there an arduous aspect of expedition in particular you just loathe?
A: I don’t loathe any physical part of fieldwork. It is challenging to be a female PI in a machismo-laden discipline and it’s common for me to have men join the team that don’t respect my leadership role, which is burdensome. When I was a student I was often the only female and regularly found myself in misguided situations; I once even had a team-leader say he would “break me” in the field. Now, I feel grateful to be in a position to provide a safe and hopefully empowering environment for a diversity of paleontologists to pursue their careers.

Q: Conversely, second to making new discoveries, of course, what’s your favorite part about expedition?
A: Expeditions hone your physical and mental grit. It’s exhausting, it’s unrelenting, and like the rest of academics, there is no one driving you forward but yourself. Each day in the field gives me innumerous opportunities to decide to do something I think I cannot do, or take the harder way for what is likely little reward when no one will ever know the difference. Those moments have trained me to choose the more difficult path if I think it’s the right one and to push past what I think are my own limits so that they don’t define my future.

Q: How long is a typical day in the field?

A: A typical field day begins at 6:30 am with the staff cooking breakfast, assembling the day’s supplies, and deciding who goes where, and ends around 10 pm after dinner, dishes, and specimen logging is wrapped up and we’ve all had a chance to chill for a bit (sometimes after a round of night bocce!).

Q: Any good pranks team members pull on each other?
A: Ha ha… I’m not at liberty to say. 🙂

Q: Any “hunting” strategy for bones?
A: My only universal tips are these: if you have to spend the entire time looking at where you are going to step next so you don’t fall to your death, you aren’t going to find a lot of fossils; and yes, you do have to climb all the way up there to check on that weird-looking rock even though that thought has never once, to my knowledge, led to an important discovery. If you are wondering… these are the “tips” I also remind myself of every day I am out prospecting.

Q: Do you listen to any music while you prospect (if so, what your favorite?), or is anything “extra” a distraction?
A: I always listen to music when I prospect these days (of course that wasn’t realistic before digital devices).  I typically end up hiking alone, sometimes for weeks, so music becomes my day-time companion. These days I’m jamming with The Record Company, Fitz & The Tantrums, & The Heavy but my favorite field songs are always theme appropriate… you just can’t beat prospecting to “Ain’t No Mountain High Enough” or quarrying to “I Fought The Law” (breakin’ rocks in the hot sun.)  Lately, I’ll admit that for at least an hour a day I pull out the headphones while prospecting and just let the silence stop time in its tracks.

Q: What findings from this summer’s expeditions are you most excited about and why?
A: This year we’re in the field from May until December hunting in portions of New Mexico, Montana, Utah, Tanzania, and if the funding comes through, Thailand. For my BIO 325, Paleontological Field Methods course this summer, we took undergraduates to a site I found last year in Montana. At the time there was only a few inches of a Triceratops frill sticking out of the hillside, so as is typical, I didn’t know if the site would yield anything significant. This year we started digging in and discovered a perfectly preserved, complete, six foot long skull buried there. I’ve never seen the team so giddy.  As beautiful as the Triceratops skull is though, I am most excited about something else more tantalizing on the upcoming agenda. Last year when we were prospecting a cliff face in Utah, we found the first record of complete oviraptorosaurian dinosaur eggs on the North American continent. Nesting sites with eggs are incredible rare and can yield powerful insights into the reproductive paleobiology of dinosaurs, and in this case, those dinosaur species closely related to birds. If additional eggs remain buried at the site, it will stand as a world-class discovery, but as usual, we have to plan the expedition with no way of knowing what secrets remain hidden there…  and that, of course, is the really exciting part.

Want to live vicariously through the Zanno crew? Follow them online at https://expeditionlive.org/ and https://zannolab.wordpress.com, on Twitter (@ExpeditionLive), and check out the North Carolina Natural Science Museum’s Paleontology Lab! The lab is one of three featured on-site at the museum which allow visitors to observe the work going on inside. For more, check out http://naturalsciences.org/research-collections/laboratories.